Volume 11 – Concepts for school sport in Europe: activity, sport and health [in German only]

This dissertation theses three typical concepts for school sport in Europe. Health education from Finland, movement education from the Netherlands and sport education from England. It shows by which criteria the national concepts are characterized and to which extend these concepts have been adopted by the other countries respectively. As a German example the rules and curricula of Northrhine-Westfalia for school sport are analysed. When comparing these three concepts of school-bases PE it becomes obvious that despite partly lots of different cultural contexts and didactical aims, they have not only a common aim (active style of living) and but dispose also of equivalent elements (positive attitude towards physical acitivity, cognitive foundation, variations of motor skills). On the basis of these equivalents finally a European basis curriculum for school sports has been constructed, which integrates in its structure the criteria of a moving, health and sports education, without neglecting the respective national pecularities. 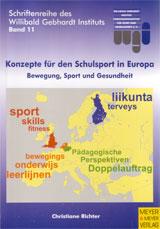 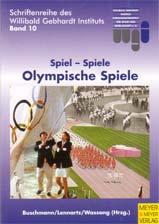 In this anthology, which is at the same time volume 14 of the dvs’s Articles and Analyses about Football, results of the 17th annual conference of the dvs-commission “football”, that took place from November 21-23, 2001 in Duisburg-Wedau, are published. The topic of the conference was “Development of young people in football – new ways in Germany and Europe”.

The first part “Concepts and strategies of European football associations” contains articles about relevant methods and concepts of the English (Telfer), the Finnish (Luhtanen), the German (Brüggemann/ Daniel/ Richter), the Dutch (van de Wetering), the Austrian (Rüttensteiner) as well as the Norwegian (Zoglowek) football association.

In the second part – with the topic “Articles and Analyses about Development of football talents in schools, in clubs and associations” – articles are published that pick up special examples and special aspects (Nieber/Kuhn) of the training and coaching of young people in football in terms of projects, studies and examples from German national associations (Schmidt) and football clubs (Spitzenpfeil et al.). Reports about an internet portal for football (Thissen), about “anticipation of self-efficacy” (Gerlach) and “determinants of the speed of footballs” (Mattes et al.) also belong to that. The international frame of the conference is rounded off by information about football in Dutch schools (Massink/ Timmers), perceptions of strain of Hungarian football players compared to German football players (Teipel et al.) and about advancement of young people in the trend sport football in Japan (Nees). 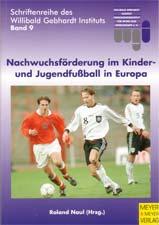 The main concern of the book is to introduce the reader into the manifold challenges and high demands a leader of an international sports organization was continuously encountered . Harold W. Henning, a dental doctor and, besides his professional occupation, an excellent athlete, couch, judge, administrator and leader, run an amazing, unique career which reached its summit in his functions as Hon. Secretary and President of the World Swimming Federation (FINA). Just during his turns of office there were many complicated political, social, economical and other involvements and made high demands on the leadership qualities at the top of an International Sports Federation. The book demonstrates in some selected examples his continuous ridge walk between sports and politics and summarizes his brilliant leadership, success, acknowledgment and distinction inclusive the retroactive effect on the self confidence and ambition. 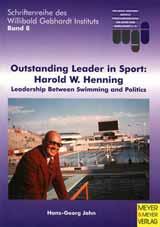 Volume 7 – The men around Willibald Gebhardt: Beginnings of the Olympic movement in Europe [in German and English]

In this book results of the second Willibald Gebhardt symposium are published which took pace in Berlin in 1999 with international participation. The authors of the articles picked out different aspects of the early history of the Olympic movement from 1894 to 1914. The first chapter deals with the development of the International Olympic Committee (IOC) since 1894 and provides insight into the world around 1900. Chapter 2 describes persons who supported Dr. Willibald Gebhardt and his efforts for Germany’s participation at the Olympic games. Gebhardt’s biography is further examined with view to his support of fencing in Germany and Austria. In Chapter 3 the beginnings of the Olympic movement in other European countries are portrayed – those countries whose representatives worked together with Gebhardt in the IOC. Also potential influences of the English sport on Coubertin’s idea to organize international Olympic games are studied as well as the resistance against Coubertin’s idea in his home country France. Depictions of the Olympic beginnigs in Sweden, Italy and Russia follow, and at the end particularities of the multiracial state Austro-Hungary from Austrian, Hungarian and Czech point of view are subject of inquiry. 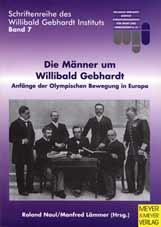